More from → Hall of Fame

On and off the mound, baseball’s most beloved bad-ass never failed to entertain. 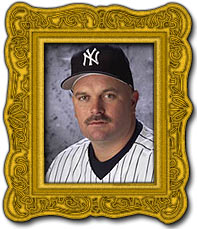 “Boomer is… Boomer. That pretty much tells you everything you need to know.” –Joe Torre.

Originally posted on Brian’s Belly in 2003 and does not include his trades to the Padres, Sox, Padres (again) or the Dodgers.

In his recently published autobiography, Perfect, I’m Not: Boomer on Beer, Brawls, Backaches, and Baseball, David Wells, the portly pitcher for the New York Yankees writes, “Babe Ruth became my first real hero. He could pitch, he could hit, he could eat seventeen hot dogs and launch a ball five hundred feet. He ate too much. He smoked too much. He drank too much. He rented his hookers by the dozen. What’s not to love?” The same might be said about our newest inductee to the Heavyweight Hall of Fame.

David Wells was never a shoe-in for major league greatness. Born in the less than affluent beachside town of Southern California known as Ocean Beach in 1963, David was raised by his mother and a slew of Hell’s Angels. David spent much of his youth going for joyrides on his buddies’ motorcycles. When he wasn’t spending his time girl watching, sunbathing or blowing up abandoned automobiles, David was mesmerizing eleven year old hitters with his commanding fast ball and girlish looks. His biggest fans at the time were frightening looking, if not harmless, biker gang members.

His Southern California upbringing introduced “Boomer” (a nickname given to him because of the sheer volume of his voice) to a world of pleasures that he enjoys to this day— booze, broads and baseball. Early on it was obvious to most observers that Boomer was destined to be a great major league hurler. He hurled things other than baseballs as well, make no mistake, mainly beer.

As his talents blossomed, so did David’s waistline. Very quickly on his route towards the pros, be ballooned from a tall skinny stringbean to well over 200 lbs. His habits of consumption even drove one of his minor league teams to require regular weigh-ins… he’d gotten that big. These nuisances didn’t bother David much— he simply rigged the scales to weigh eight pounds lower than the reality. Weigh-ins were no longer a problem.

Boomer is, was and hopefully always will be a master carouser. He was arrested in Chicago for mouthing off to a cop. He was involved in a Brawl in a New York diner. He has even alluded to the fact that was suffering the after effects of a New York night out when he pitched his legendary Perfect Game against the Minnesota Twins in 1998.

He is even a regular at the weekly Saturday Night Live wrap parties. His connection to the latter resulted in a hilarious guest appearance on a Derek Jeter-hosted SNL where David Wells and teammate David Cone surprised everyone by appearing onstage in drag. This is a man who will do whatever it takes for a good time.

David Wells’ alcoholic habits haven’t come without setbacks however. Besides the seemingly endless string of hangovers that plague the massive major leaguer, Boomer also suffers from the official medical condition of Belly Buddy Brian Bailey– the GOUT. Not to mention he has endured one of the worst back conditions ever to have afflicted a human being. Through it all David maintains a reputation as a “Gamer.” When your team needs a win, Wells is the dude you want to be holding the ball.

Through it all David Wells has never failed to entertain. His teammates love him, even if his bosses consider him a royal pain in the ass. The fans go insane for him, even those who hate his team. Everyone has a soft spot for the giant with the soft stomach. Everywhere he goes, plays, drinks and eats, you can be sure that this SoCal, Metallica loving, family man will have a good time- on his terms. And who is going to argue with him? Not Brian’s Belly. We’d like to buy him a drink.

Forget the perfect game. Forget the World Series rings. Forget the legendary carousing, the barroom brawling, the heavy-metal head-banging, and the endless supply of uncensored, often havoc-wreaking quotes. Forget the feuds with dumb-assed fans, wrong-headed managers and the entire city of Cleveland. Even if Perfect I’m Not was to blindly (and insanely) ignore all those amazing aspects of David Wells’ life as a major leaguer, his story would still bounce off these pages as a wildly entertaining and jaw-droppingly honest look at the game of baseball.

From rookie ball amid the beer-soaked, frozen tundra of the Great White North, through Winter Ball amid the easy women and explosive diarrhea of Venezuela, Perfect, I’m Not explores Boomer’s long, strange, often insane climb through the minors and right through the Yankees’ fairy-tale seasons of ’97 and ’98.

Perfect I’m Not gives readers an unprecedented, all-access pass to every major league stadium in the country, providing a first-person perspective of life on the diamond, as well as an uncensored, warts-and-all, insider’s guide to life inside locker-rooms, hotel rooms, planes, dugouts, buses, bedrooms, restaurants, titty-bars, and more. It’s great fun. It’s real. It’s as close as you’re ever gonna get to making the show.

from → Hall of Fame