More from → Hall of Fame

“I swing as hard as I can…I swing big, with everything I’ve got. I hit big or I miss big. I like to live as big as I can.” -George Herman “Babe” Ruth 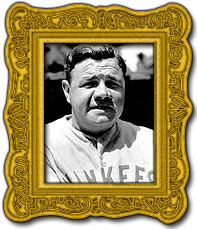 We’ve all seen newsreel footage of that egg shaped humpty-dumpty body mounted above a churning set of stick legs, arms tucked against the ample mid-section, circling the bases after a mammoth home run. He was truly one of the best—a great in every sense of the word. 714 home runs with a lifetime .342 batting average. Even against today’s standards, awesome numbers. Many don’t realize that he was also a fantastic pitcher, winning 20 games two years in a row for the Boston Red Sox. Incredible feats of athletic skill, yes. But what gives this legendary slugger entrance to the Brian’s Belly Heavyweight Hall of Fame? Why, it’s “The Curse.”

Not many understand the true nature of “The Curse of the Bambino.” For the uninitiated, the curse supposedly was cast the day after the 1918 World Series in which the Boston Red Sox had triumphed. Babe Ruth was their ace pitcher and hitting star. With the duel weapons of Ruth and a mighty supporting cast, the Sox had a firm grasp on the balls of the American League. Perhaps it was greed, or hubris or mere stupidity. But for whatever reason, the team then sold Babe Ruth to the floundering New York Yankees. The Sox have not won a World Championship since.

Now this is where The Curse gets interesting. Here now is where the Babe set a course to humiliate his former team in every way possible—including a bold in-your-face lifestyle. In affect, the Sultan of Swat proclaiming, “I’m gonna become a big fat drunken sex maniac and STILL kick your ass.” Proof in point—it is believed that the famous “called shot” was not simply a brazen gesture of defiance in the 1932 World Series. Standing in the batter’s box, the story goes, Ruth pointed out a bucket of fried chicken in the center field bleachers, telling the Cubs catcher “I’ll take that and some bourbon and call it a night.” The rest, as we say, is history.

Legends follow such great men–and as legend would have it, it is said that the Babe occasionally left baseball games between the Chicago White Sox and the New York Yankees, headed to a Chicago bar named McCuddy’s and drank beer between innings. It is also told that Ty Cobb once saw him eat half a dozen sandwiches and an entire jar of pigs knuckles washed down by a pitcher of beer.

from → Hall of Fame

[…] Backaches, and Baseball, David Wells, the portly pitcher for the New York Yankees writes, “Babe Ruth became my first real hero. He could pitch, he could hit, he could eat seventeen hot dogs and launch […]

[…] The first being baseball legend Babe Ruth in The Babe (coincidentally another inductee in our Hall of Fame). The second, his Yaba-Dabba-Doo time as Fred Flintstone, the original bowling, beer-drinking, […]