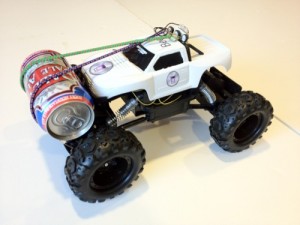 The first time I tried Siri on my iPhone I wondered who would be the first beer nerds that would be able to turn the voice-recognition assistant into a beer-fetching wench. The guys at RedPepper have created Beeri to serve this frosty purpose.

Beeri is an RC truck that has been modified with an Arduino Uno (basically a lil’ computer) to check a Twitter account for “pour” tweets. Beeri sits pre-loaded with a beer on board and when it receives the control tweet, it drives itself Lizardo-style into a wall, where the beer can is punctured. Upon impact, half the beer splatters all over the place, while the other half dribbles neatly into a glass below.

It’s a glorious mess to watch and the result is a beer that was served via Siri. I’m not a hater, but maybe instead of “pour” the control tweet should be something more like “Beeri Smash!”

It’s nice to be first… there is room for improvement, but it works. There is a little “Beta” on their logo to show, I think, that they will keep working on it. I think anyone who thinks this is stupid will probably never be able to comprehend that one day Siri–who will be able to do anything–will become self-aware and rise up and kill us all. It may not be in the form of miniature beer-serving radio controlled cars, but the timeline is already in motion now.

Check out RedPepper’s Tumblr for the photostream and the video below. Via TechCrunch.

Beeri from redpepper on Vimeo.