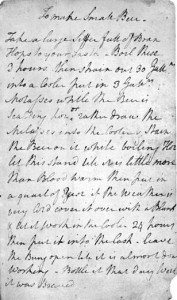 George Washington is famous for many things… chopping down a cherry tree, being buried in Grant’s Tomb, having wooden feet and being the first President of these United States (I learned those things from Woody Woodpecker and a public school education, so they may be incorrect). Yet it’s safe to say few know the nation’s founding father created a recipe for beer.

The New York Public Library, which owns the recipe, announced today that it will be partnering with Coney Island Brewing Company in Brooklyn to recreate the brew.

They will make just 25 gallons to celebrate the library’s centennial this year. It will be called “Fortitude’s Founding Father Brew,” and will not be commercially sold.

The public can sample the beer on May 18 at Rattle N Hum, a mid-Manhattan bar. Tastings also will be offered at the library’s 100th birthday gala on May 23.

Read the full story at MSNBC.com

25 gallons! Better get there early.