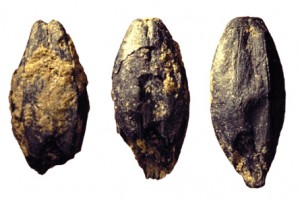 Early Celtic rulers of a community in what’s now southwestern Germany liked to get their drink on with beer according to an article in Science News. Let’s party like it’s 500 B.C.!

Evidence suggests they built a brewery capable of turning out large quantities of a beer with a dark, smoky, slightly sour taste.

Stika compared the resemblance of the ancient grains to barley malt that he made using methods the Celts would have used and figured out how they must have affected beer taste. His conclusion was that their beer had a completely different taste than what we’re used to today.

That’s not really surprising… 2,500 years ago they didn’t have the resources to make bland, watered down, over-carbonated beers like large brewing companies do today. Although medieval additives made the beer more intoxicating, beer buffs today would regard Celtic beer as a strange brew not only for its flavor but because it would have been cloudy, contained yeasty sediment and been imbibed at room temperature.

I’m amazed at what scientists can dig up (pun intended) about things that happened so long ago. Do they know what the name of the beer was? You know, like Celtic Ice or Ancient Blue Ribbon?