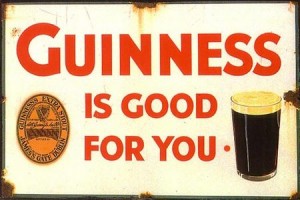 A new study reports that beer is an excellent recovery beverage for marathon runners. But you won’t be stumbling across the finish line… the beer was effective only if it was nonalcoholic. Damn.

Running a marathon is, of course, punishing to the body. I should know, I signed up for the NYC Marathon once (well, the hangover from the night I was drinking, lost the bar bet and signed up was punishing).

To study the matter, researchers at the Technical University of Munich approached healthy male runners and asked if they would — in the name of science — be willing to drink a considerable amount of beer. Two hundred seventy-seven men agreed, even when told that the beverage would be nonalcoholic. Half of the group received the alcohol-free beer, the other half got a similarly flavored placebo. They all downed about two to three pints every day beginning three weeks before the race and continuing for two weeks afterward.

The results? The men drinking the nonalcoholic beer reported far fewer illnesses than the runners swallowing the placebo beverage. They also showed significantly less evidence of inflammation and lower counts of white blood cells than the placebo group, an indication of overall better immune system health.

The lead author of the study says the beverage’s rich bouquet of polyphenols “suppress viral replication” and “influence the innate immune system positively,” all beneficial for fighting off a cold.

Who wants to try this with alcoholic beer? You know — in the name of science?

Read the full post at The NY Times Blog.