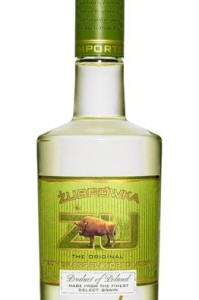 It’s been a Polish national drink for centuries, but for years Żubrówka has been banned in the United States. Now, after decades of work on two continents to formulate and brand a legal version of the alcohol, its producers are taking a shot at the American market.

Żubrówka, is unusual because it is flavored with a rare, pungent wild grass enjoyed by European bison. But in the U.S., it’s taboo because the FDA prohibits a potentially toxic chemical that occurs naturally in bison grass called coumarin. Each bottle has a blade of the grass in it for the drinker to admire. It has been described as the absinthe of Poland or, as one marketing manager put it, a “forbidden fruit.”

Just like the thujone-free absinthe that has come before it here in the U.S., something (unfortunately) has to give in order to get it across our border. The vodka is being sold here under the name Żu, without the coumarin. Polish purists argue the taste is lacking. Or, as one customer put it, “The real one is something special… It has the smell of the forest.”

Via The Wall Street Journal.

It shows how sensless are those laws. I can’t imagine Żubrówka without bison grass inside.
Greetings from Poland!

I would be willing to try the real stuff! It’s probably more hype than anything, just like with absinthe.

Anyone know what a bottle of this costs?