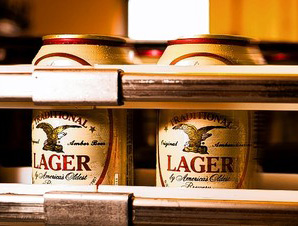 D.G. Yuengling & Son Inc., one of the fastest-growing U.S. beer makers, is close to acquiring a former Coors plant in Memphis, Tenn., to help the company meet rising demand and increase distribution beyond the eastern United States.

Yuengling is the oldest brewer in the U.S., and is a newly discovered “American Favorite” to many former Budweiser drinkers after Anheuser-Busch was sold to Belgium’s InBev. It’s the seventh-largest U.S. beer supplier by sales volume. Acquiring the facility would give the Pennsylvania brewer a fourth manufacturing facility and help it expand distribution beyond its current 13 states in the eastern U.S.

I personally did not know that they are only in 13 states. Here in NY, I see it everywhere… tap, bottles and to a limited extent, cans. It is relatively inexpensive to other big-name beers.

Yuengling, founded in 1829 and owned by fifth-generation brewer Dick Yuengling, accounts for about 1% of the U.S. beer market.

Yuengling Lager is slowly becoming my “go to” beer. I prefer picking up a case of this to Sam Adams Lager.