Just-Add-Water Beer is Now a Thing 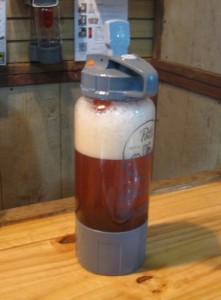 Survivalists and hikers may find this exciting news; beer enthusiasts, perhaps not so much. A company in Alaska has created a beer concentrate and carbonation system that lets you make a beer in a pinch.

Pat’s Backcountry Beverages has a patent-pending “Hybrid Brewing Technology” system to create the concentrate which is a 49 percent alcohol beer syrup that Pat Tatera says “upholds the German purity laws — it’s barley, water, hops and yeast.” Once water and carbonation is added, you get a 16oz, 5% ABV beer.

The idea is that as a hiker, you don’t want to carry a keg-load of water-heavy beer in beer-vestles up a mountain. So you can presumably find or filter clean water to place in your carbonator, add “activator” powder, pump, and add beer concentrate. Then maybe pump some more. Viola! Warm to slightly-warm beer that will act as a diuretic and dehydrate you!

I mock, but that’s because the niche for this market may be rather small. The interesting part is that this technology could be used in the future to distribute and dispense some kind of beer-like beverage in the same manner as fountain soda. Did I say interesting? I meant scary… because I really don’t want beer this way. I like to concentrate on beer. I don’t think I would like beer concentrate. I’m sure the Germans would say something about that claim of upholding of the German purity laws too.

C.C. Weiss at GizMag tried Pat’s Pale Rail beer at a demo and was impressed with the technology, but not so much with the taste of the beer… “Its flavor was thinner than a typical pale ale” but also notes that “it was better tasting than a lot of lighter, less flavorful beers on the market, and it packs an alcohol content that’s quite typical of other beers.”

The system is designed for backpackers, but survivalists that haven’t learned to brew-their-own yet may find it an interesting–if somewhat pricey–way to make beer when the Zombies have them on the run. The beer concentrate will be $10 a 4-pack when it goes on sale in September this year. Because of the 100-proof concentrate, it will have to be sold in liquor stores. You’ll also need the $30 carbonator and CO2 activators which are $6 for 12.

The video below presumably shows the soda version of the process wherein the ice you carried up the mountain is added after you shake-weight your way to fizzyness:

Pat’s Backcountry Beverages via GizMag and others.