Fat Tuesday Is As Fun, Fat As Ever 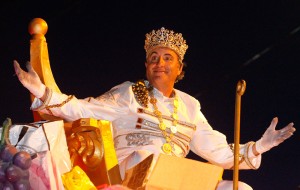 For the past week (or longer) New Orleans has given itself over to good food, lots of drink and excessive debauchery. It’s Fat Tuesday, and that means the marathon party known as Mardi Gras is in it’s home stretch.

Fat Tuesday, also known as Mardi Gras Day, is a celebration the day before the Catholic holiday of Lent (Ash Wednesday) in which worshipers fast and repent for 40 days. Revelers do their best to make up for the coming days of restraint with jam-packed days of plenty. Festivals are observed all over the world (such as Carnival in Brazil) but here in the U.S., New Orleans is identified and officially designated for overindulgence and debauchery. Mardi Gras became a legal holiday in Louisiana in the late 1800′s, but New Orleans has been celebrating like this since the 1700′s.

Parades and celebrations will continue throughout Fat Tuesday in the Big Easy.  As outsiders, one of the Krewes we like to check in on is the Krewe of Bacchus… who typically crowns the best Kings to lead their parades. This year’s King is Andy Garcia, who has been preceded by such great Kings as Val Kilmer, Larry King (who is an actual King), William Shatner (who is technically a Captain) and one of our own Brian’s Belly Hall Heavyweight of Famers, Drew Carey.