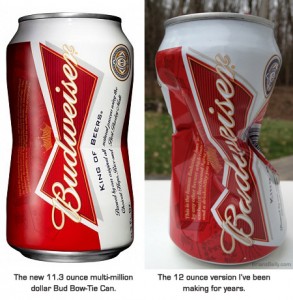 Every girl’s crazy ’bout a sharp dressed can. At least that’s what Anheuser-Busch hopes with it’s latest gimmick to sell Budweiser.

This week, AB introduced a bowtie-shaped aluminum can that mirrors Budweiser’s iconic bowtie logo. It will be available in a special 8-pack on store shelves nationwide beginning May 6, although I’ve seen it in a local beer distributor already.

The can apparently cost AB millions in research as engineers needed to solve a number of technical challenges to create the shape. The can required a 16-step machining process… 10 steps to form the bottom half of the can, with an additional six steps to form the top portion. I don’t know if that’s a lot, but it’s “easy to grip” according to their press release.

Unfortunately, drinkers partaking with the new can will only receive 11.3 ounces of beer for their fancy bowtie-wearing sacrifice. AB puts a pleasant spin on this by pointing out that the new can has only 137 calories… approximately 8.5 fewer calories than a traditional 12-ounce can of Budweiser.

So where did that extra ounce go? Buried in the press release is this interesting little tidbit “In other packaging innovations on the horizon in the U.S. for Anheuser-Busch, the company is announcing it is test-marketing a new 25-ounce can that replaces a 24-ounce serving – giving consumers an additional ounce of beer. Sales of this new can will begin this summer.”

I don’t really know the point of that particular innovation, but I don’t think I’ll be purchasing and drinking from a can that I can shape myself with a crush of my hand. Make a can that holds 13 ounces for the price of 12 and I’ll be impressed.