New Bud Light Platinum Not So Light, But It’s Blue! 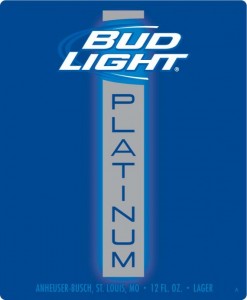 Belgian-owned Anheuser-Busch InBev is adding some bling to one of its most popular beers. Bud Light Platinum will be the newest addition to the brewer’s beer fridge as they aim to appeal to “upscale light beer” drinkers.

According to their press release, the new beer will have “a slightly sweeter taste, higher alcohol by volume (6%) and signature cobalt blue glass bottle.” AB InBev say Bud Light Platinum will provide beer drinkers “an upscale light beer option as a companion to their social agenda.” I think that means they want you to tweet about it.

What the press release doesn’t say–and what other “real” news outlets are reporting–is that Bud Light PLatinum weighs in at 137 calories, only 8 below Budweiser which is 145 calories and 27 more than Bud Light at 110 calories. The anemic Budweiser Select 55 is, well, 55 calories. In the ABV spectrum, Select 55 is the lowest at 2.5%, Bud Light lands at 4.2% with Bud hitting 5%. The 6% ABV of Bud Light Platinum puts it close to double that of what Bud was when I was growing up.

Some are pondering that Anheuser-Busch is going after the craft drinker with Bud Light Platinum because it has such a high ABV, but I beg to differ. Beer enthusiasts don’t drink a beer simply because it has more alcohol, they don’t drink beer because it’s in a colbalt blue bottle, and they definitely don’t drink beer when it has the words “Bud Light” in it’s name. No, AB InBev will continue to buy stakes in companies like Goose Island if they want to make money from craft beer drinkers. Platinum is just a little extra sugar in Bud Light, just like lime flavoring in BL Lime and wheat flavoring in BL Golden Wheat.

Bud Light Platinum will hit shelves at the end of January, 2012.

Will we ever get a bud lite platinum dry ice beer? Or will this flavor be off the shelves faster than their tomato juice bud

Who do they think they are, American Express?