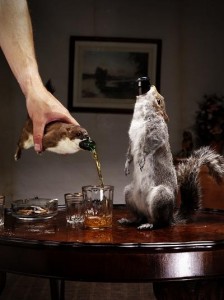 The guys at BrewDog have outdone themselves… yet again.  Their latest beer, The End of History, is the strongest beer brewed to date.  Oh, and it’s sold in stuffed grey squirrels.  Wearing kilts.

Back in April, the crew brought us Sink the Bismark! an Imperial Pale Ale that was 41% alcohol by volume… which was the strongest beer in the world. Not long after that, a German company named Schorschbrau released a beer that was 43% A.B.V.

Since A.B.V. technology seems to be moving at light-speed this year, the BrewDog crew has released another beer that blows previous alcohol levels off the breathalyzer.  The End of History, at 55% A.B.V is a blond Belgian ale infused with nettles from the Scottish Highland and fresh juniper berries. Each $768 (U.S.) bottle comes with a certificate of authenticity and comes in a bottle presented in a stuffed stoat or squirrel that was created by “a very talented taxidermist.”

Only 11 bottles were made… and were sold.  You’ll never get to taste beer from a road-kill squirrel… unless you make one yourself.

You can still buy their 32% Tactical Nuclear Penguin and the 41% Sink the Bismarck! from their site.

For more on The End of History, visit the BrewDog blog.