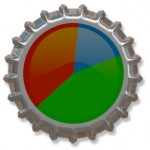 A recent Rasmussen Reports survey found that 69% of American beer drinkers choose domestic beers over imported ones, light beer over regular beer, and their top choice is Budweiser; which, umm, is not a light beer.

The telephone survey, which reports on a paltry 345 beer drinkers nationwide, says that when when asked what kind of beer they are most likely to drink, one-in-four (25%) say they are most likely to drink Budweiser with the  second choice being Miller at 19%, followed by Sam Adams at seven percent (7%). Coors, Heineken, Corona, Pabst and Guinness are next, in descending order. The remaining 25% choose some other brand.

But here’s the rub… aside from what I would call a rather small amount of people polled (345 in a NATION!?) the actual question Rasmussen asked was practically a multiple choice: “Which brand of beer are you most likely to drink… Budweiser, Miller, Coors, Corona, Heineken, Pabst, Sam Adams or Guinness?”

The same flawed poll actually first asked three other questions, including “Are you more likely to drink a light beer or a regular beer?” to which 49% choose a light beer and 46% prefer a regular one. To quote Norm MacDonald: “Wait, what?”  If people prefer light beer, how did Budweiser claim the number one spot? I guess it’s weird that no respondents seemed to actually answer with a light beer… possibly because they were missing from the prompted answers, a list of beer names AND brands for some reason. Maybe “Budweiser” meant any one of the 14,000 beers that Anheuser-Busch InBev produces?

Of a random sampling of people in the room this morning while I was typing this, 50% said “what, do they do that because those companies paid them, or for web traffic?” and another 50% said “probably both.”

I’m sure Rasmussen spent a lot of cash to get those answers… I’m going to hit a “poll” button on my computer here and see what kind of results I get… feel free to participate.

Rasmussen’s political polling is far better than his beer polling. Beer aficionados are forever drinking a lot of different beers. I believe we have multiple “favorites”, and I can think of a dozen brands that please my palate perfectly at any given time. I won’t even make an attempt at suggesting the different types available. We are at what may be the high water mark for overall beer excellence worldwide. Bud used to rule due to it’s consistency, which was underwritten by their brew master’s ability to produce a beer that shipped well, and held it’s freshness longer than any… Read more »

I can see how that would be flawed too… Budweiser could commonly mean “Bud” or as a brand it could be “Bud,” “Bud Light,” “Urine,” etc. But in the same list, Pabst can really only mean one specific beer.

I looked at the question order on their site… that is kind of dumb. If someone answers “light beer” over “beer,” why wouldn’t the next question be “What kind of light beer?”