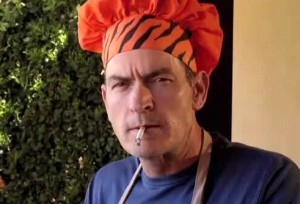 In Charlie Sheen’s continued blitz to be a part of every tweet, stream and channel,  the newly unemployed actor crafts his winning warlock skills into a faux cooking show for Funny or Die. Watch out Food Network, Charlie’s coming for you.

“Charlie Sheen’s Winning Recipes” is full of the catch phrases that we’ve all come to know and love. The somewhat amusing (yet must-watch) video has Charlie’s tiger blood (see drink recipe here) craving meat… so he prepares a steak from a cow that he stalked and killed himself.

But this is Charlie Sheen… he doesn’t cook food, he wills it. “The best way to cook a steak is with moderate to intense observation.” Ah Charlie, keep living the life that all of us men want.

The script was written by Adam McKay, who runs Funny or Die with co-horts Chris Henchy, Mike Farah and Will Ferrell.

It turns out, Charlie Sheen was the 1/2 man in Two and a Half Men. When you think about it, Jon Cryer is the one making Charlie Sheen funny. Alone, Charlie is just meh… but a crazy meh.