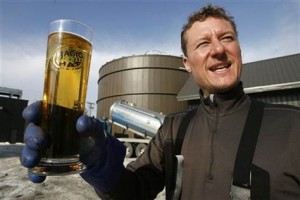 Eric Fitch with a tall, green one. Photo: Toby Talbot/AP

Inventor Eric Fitch is going to “save the earth, one beer at a time.” The mechanical engineer has invented a patented device that turns brewery waste into natural gas that’s used to fuel the brewing process.

The “anaerobic methane digester,” installed last year at Magic Hat Brewing Co. in Vermont, extracts energy from the spent hops, barley and yeast left over from the brewing process and it processes the plant’s wastewater. That saves the brewer on waste disposal and natural gas purchasing.

Most beer operations do something to re-use the waste products of brewing… Anheuser-Busch InBev recovers wastewater and turns it into fuel, New Belgium Brewing uses heat from the process to keep things warm around the brewery, Coors sells ethanol to refineries, and most brewers in Europe dry and burn their spent grain to create heat energy.

But the anaerobic methane digester is the first in the world to extract energy from the spent grain and then re-use it in the brewery all in one place. At Magic Hat, the big brown silo is located about 100 feet from the main complex.

Thanks to Eric, green beer won’t just be for St. Patrick’s day.