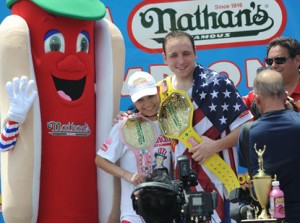 Chestnut choked down 62 dogs and water-soaked buns on Nathan’s Famous stage – falling short of his 2009 world record of 68 dogs but ending with a healthy nine dog lead over his nearest competitor Patrick “Deep Dish” Bertoletti.

Meanwhile, his off-balanced renegade rival Takeru Kobayashi claims to have powered through a new world record 69 dogs in an unsanctioned, simultaneous scarf-down on a Manhattan rooftop. You may remember Kobayashi as the weiner that was arrested last year after crashing the official event’s stage. I’m not sure why this dude has so much trouble playing by the rules. I think being a dick is probably not the best way to make fans… or to ever get asked back to the official contest.

This year’s competition was the first to feature a separate event for women, with Sonya “The Black Widow” Thomas taking the first-ever title. She won by eating a jaw-dropping 40 dogs.

Read the full story at The Daily News.

Kobayashi is a no-win scenario!

Joey Chestnut rules! Takeru “The Tsunami” Kobayashi is a bag of wind.