Bottoms Up Beer Dispenser is Simply Intoxicating to Watch 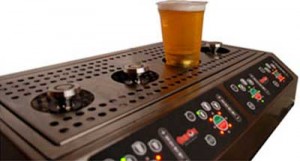 The beer industry is notable for creating useless contraptions for the dispensing and distribution of beer. Vortex bottles, a box with a clear window so you can see how many beers are left, and mountains that turn blue so that you can tell if the beer in your hand is cold. Then there are the gadget makers that have created burping bottle openers, belching beerfinders, and a plethora of robots that do little more so far than slow down your drinking fun.

So it’s nice to see something that actually looks useful. The Bottoms Up Beer Dispenser fills beer cups from the bottom, you know, like magic would. A beer vendor places a plastic cup on the dispenser, and without lifting a finger, it fills up in seconds, with a nice head to boot.

The secret is a thin, circular magnet that seals a hole at the bottom of the cup. When the cup is placed on the dispenser, the magnet raises and the beer flows in. When the filled cup is lifted, the magnet drops back into place, attaching to a metal rim at the cup’s base. The magnet only adds a few cents to the price of the cup.

The breakthrough product from GrinOn Industries is already filling beer cups in about 25 venues around the country and Anheuser-Busch InBev has recently bought the advertising rights to the magnets on the bottom of the cups. I think the only thing that may slow this down is the line to pay for your beer, but I’m sure there’ll be an app for that soon.

In case you didn’t catch it on the YouTubes, here is the first video I saw of this magical contraption:

Check out more on the internet.